Designing Restrooms for “Accessible All-Gender” Use Designing Restrooms for “Accessible All-Gender” Use

The national media has been full of discussion concerning individual rights using public restrooms. Some state legislatures have reacted making changes in accessibility including transgender persons. While the controversy continues between state and federal entities, design of public restrooms is unclear. The federal government is threatening to withhold funds to state entities that violate federal ADA accessibility regulations including access for transgender persons. The lack of clarity of the issue is affecting designs for new public restroom floor plans and for planned renovations to offer transgender signs to allow use in gender-specific restrooms. Many public agencies are holding back on renovations to meet the transgender unclear movement as they are not sure which laws to follow.

The Issue
The problem arises when several states passed laws to define the conditions under which transgender individuals could use a men’s or women’s restrooms, opposite to their natural birth gender. The conflict between local agencies and the federal position on the matter remains in debate and unclear how and/or when to follow state or federal law. The transgender community claims they have the right to use whichever restroom facility is furnished while the non-transgender community disagrees. The problem is far from being resolved, but some public agencies are in advance of final decisions, moving to provide accommodations. With the ongoing debate years away from becoming a defined law either state or federal, and with signage still undefined to meet codes, it remains a local decision only for public agencies to act or wait for clarity.

Signage
Those public agencies who wish to find some middle line of response to the issue have turned to replacement of signs for single-use restrooms that can be used by families or transgender. Changing the sign is low cost even though definition of the size and layout remains unclear. The cost of signage modifying traditional code-compliant signage is minimal compared to adding a transgender/family restroom in an existing separately sexed restroom building that does not contain an existing family restroom.

In airports, for example, “family restrooms” are now everywhere. These facilities are perfect for all who choose to seek privacy and accessibility including the transgender community. Yet this new concept of a building a separate individual room for family members or transgender individuals may be objected to by the transgender community as not allowing them to use a separately gender defined restroom and therefore an infringement on their rights.

Current Federal Position
Currently the feds are threatening to file legal action to remove funding from state and local agencies who violate the existing federal codes through enactment of local laws and codes in contrast. The issues seems to be whether the definition is one’s birth gender or their chosen gender through medical procedures.

Current Best Answer for New Restroom Design and Construction
Design a separate gender restroom and include a family/transgender single room accessible restroom in the same building as we find today at airports. If the law and regulations becomes defined in the future probably just a signage change will most likely meet the new regulations at minimal cost. The floor plan above shows this concept with separate gender restrooms and a family/transgender separate restroom for specific use. 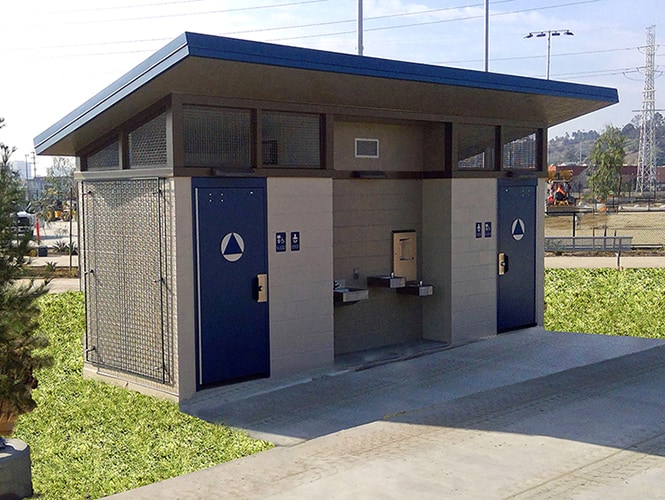